The newly released TV Spot shown on the new Star Wars Korean YouTube Channel has a 30-second clip contains Supreme Leader Snoke’s (Andy Serkis) same voiceover from the first teaser, with much of the footage recycled from the second. There’s actually only one new shot: A sweeping look at The First Order (above), and it looks like quite the force to be reckoned with. It also looks like Captain Phasma (Gwendoline Christie) and possibly General Hux (Domhnall Gleeson) looking out over all those stormtroopers from the platform.

Domhnall Gleeson as General Hux, a cruel leader of The First Order who craves to show the galaxy his might. (This image was briefly shown at Comic-Con but never released in detail until now.)

Domhnall Gleeson as General Hux, a cruel leader of The First Order who craves to show the galaxy his might. (This image was briefly shown at Comic-Con but never released in detail until now on the Star Wars Facebook page)

Inside this shimmering armor is a warrior for The First Order, Captain Phasma (played by Gwendoline Christie of Game of Thrones). Her character’s name has an unexpected origin…so JJ says 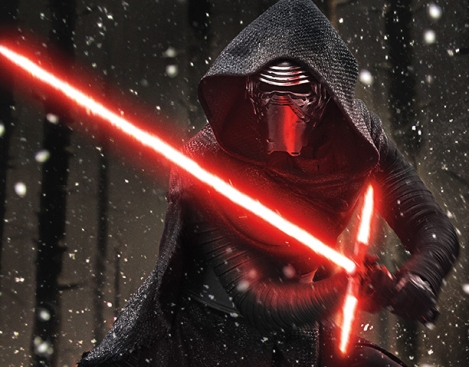 Kylo Ren (played by Adam Driver) strikes a pose with his homemade lightsaber. It turns out, his true identity has been masked from us in more ways than one …

Kylo Ren (played by Adam Driver) strikes a pose with his homemade lightsaber. It turns out, his true identity has been masked from us in more ways than one …he’s also part of The Knights of Ren

Kylo Ren amongst the smoldering ruins of a Jakku Village

They’ve even released some new shot of our old friends, but in a new time and place. R2-D2 seems to have hardly changed, but C-3PO (still played by Anthony Daniels) now sports an unexplained red arm.

Also the shot of Poe Dameron that was shown at Comic-Con, which shows his Black X-Wing and more importantly Gonk is BACK...Hurrah!!! …But there’s a reason the X-Wing fighter is black, but J.J. Abrams wants to keep that a mystery for now. Stealth tech?

Some new images from the Star Wars Facebook account, the best one is the stormtrooper taking aim at Ray & Finn…no bets on if his misses 🙂

Daisy Ridley’s Rey and John Boyega’s runaway stormtrooper Finn flee from The First Order on the desert world Jakku in this new shot from Star Wars: The Force Awakens

After a violent escape, John Boyega’s Finn runs from the wreckage of a TIE fighter, afraid, desperate, but lucky to be alive.

Rey (Daisy Ridley) meets up with BB-8 while cutting him free from a fellow scavenger’s net. But what is that large creature — and who is riding atop it?

So we now have some captivating new information concerning the main villain in Star Wars: The Force Awakens that was teased by J.J Abrams and Lawrence Kasdan in a recent interview with Entertainment Weekly. They’ve said Kylo Ren, who is played by Adam Driver isn’t his real, but instead he’s named in the same way in which Vader is called a Darth like many other Darth names in the Star Wars universe. The Darth name is often thought to be a combination of letters from the title Dark Lord of the Sith, a theory which is only officially alluded to in Jedi vs. Sith: The Essential Guide to the Force, but many other theories exist like, Darth may also be a portmanteau of dark and death. Instead for Kylo he’s now part of The Knights of the Ren.

So what is this group called Ren’s and what does it stand for? Is it Knights of the Renegade?  Is he linked to Luke? Who knows?

But whilst talking to EW, director Abrams confirmed that Ren is someone who’s aware of the events that took place during the original Star Wars trilogy and that his appeal is Ren’s intentional nod to Darth Vader.

“The movie explains the origins of the mask and where it’s from, but the design was meant to be a nod to the Vader mask. [Ren] is well aware of what’s come before, and that’s very much a part of the story of the film.”

Abrams also revealed that Kylo’s weapon of choice, the infamous crossguard lightsaber that he wields is something he built himself, and “is as dangerous and as fierce and as ragged as the character.” Not only that, but apparently the character sees himself as the hero of the story. The director explained

“As you see in the best of storytelling, and no doubt the best of Star Wars, these are tales in which an every person has to step up. And I think that what makes Ren so unique is that he isn’t as fully formed as when we meet a character such as Darth Vader. And I think that there are two sides to the Force. Both sides, arguably, would see themselves as the hero of their story, and I think that applies here.”

“Kylo Ren won’t be the only “Ren.” The title of “Ren” is something that someone has to earn.” Abrams said,

“He is a character who came to the name Kylo Ren when he joined a group called the Knights of Ren. He is not your prototypical mustache-twirling bad guy. He is a little bit more complex than that, and it was a great joy to work with Adam Driver on this role, because he threw himself into it in a deep and remarkable way.”

Lawrence Kasdan also waded in with his input on the character and also talked about Driver’s performance in the movie: 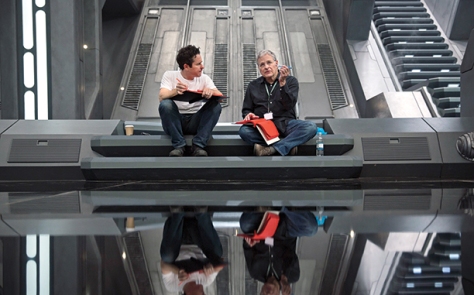 “I’ve written four Star Wars movies now, and there’s never been a character quite like the one that Adam plays. I think you’re going to see something that’s brand new to the saga.  He’s full of emotion. No matter how we express ourselves in the world, whether we hide it and act very calm or whether we’re very out there and demonstrative, everybody’s roiling with emotion. And you want your characters to be that way, too. Then they have to deal with their emotions as best they can, with what they are. (Kasdan pauses as if he is on the verge of saying too much)…  I’d say that is as far as I’d go”.

So after learning all this ‘new’ information, how does this character fits into the saga? Is Ren in some way related to the Skywalker family. With his knowledge of the events that took place in the original trilogy and his obsession with Darth Vader.  Is he this inverse of Luke? Is Ren perhaps not the villain but the hero  who comes from no means, who rises from obscurity and yet still manages to cause tremendous upheaval in the force…is he the new chosen one?

“Noooo! I’ll never join you!” That’s what Luke Skywalker cried out when Darth Vader asked him to cross over to the Dark Side and rule the galaxy alongside him, and J.J Abrams basically said the same thing to Lucasfilm president Kathleen Kennedy when she first reached out to ask if he’d sign on to help launch the first in a new assemblage of Star Wars films.

Kennedy persuaded him to helm the film by asking him one simple question, one with the potential to upend our core beliefs about the galaxy far, far away. “In the context of talking about story and laying out what we were thinking, I said one thing to him,” Kennedy recalls. “‘Who is Luke Skywalker?’”

Abrams, decided he needed to know the answer, even if he had to devise it himself. “He said, ‘Oh my God, I just got the chills. I’m in,’” Kennedy says. “I mean, it really was almost that quickly.”

It would definitely make The Force Awakens a more dramatic film if Kylo Ren was related to the Skywalker family.

One last ’put it out there idea’ like with the Sith, “Always two there are, a master and an apprentice.” Who is Ren’s master …Luke?

One final final bit…The latest released image which shows Kylo flanked by First Order stormtroopers, striding with intense purpose through the smoldering ruins of a once peaceful village on Jakku..