This shot of a squad of Deathtroopers on a beach assault on the Planet Scarif, they are tasked with hunting down and destroying the fragmented Rebel uprising.

Rogue One’s central figure is Jyn Erso (Felicity Jones), a young woman recruited by the Rebellion to infiltrate the Empire and secure details of its latest weapon – a moon-sized battle station we know as the Death Star. Here we see her in disguise, armed for conflict inside an Imperial corridor. Lucasfilm president Kathleen Kennedy says Jyn starts as an outlaw and “becomes a kind of Joan of Arc in the story.”

Paradise Lost on the Planet Scarif : One of the key battlegrounds in Rogue One is on the Planet Scarif that might resemble a relaxing seaside holiday destination if not for its proximity to the Death Star. That leads to a key battle in the film taking place on its balmy shoreline — blue waters and an eerie gray sky.

Toy Soldiers : This is one of the most intriguing photos from Rogue One, Deathtrooper’s prowling on a tundra of Scarif. One of them is holding what appears to be … an action figure of sorts. The filmmakers didn’t want to explain exactly what’s happening here, but they confirm: yes, that’s a Stormtrooper doll, a galactic version of a toy soldier. And it will have special significance in the story. (Decades later, an abandoned girl name Rey will also fashion a doll for herself — this one an X-wing pilot.)

Baze Malbus Takes Aim : While Chirrut puts his faith in the Force, Jiang Wen’s hard-bitten soldier, Baze Malbus, clearly believes more in the force of firepower. Here we see him taking up position beside a crashed X-wing fighter, toting a blaster that’s linked up to a massive power pack on his back. Was he the pilot of this downed vehicle? In the teaser, we see Chirrut taking out Stormtroopers with this wreckage in the background. Is this where the two meet and become brothers-in-arms — or does their friendship go back much further?

The Death Trooper, a sinister new classes of Stormtroopers. Storywise, what became of these designs during later years of the galactic conflict? Were they experimental models? Will the Rebel victory be so complete that the Empire never uses them again? Will the Deathtrooper squad be utterly annihilated? 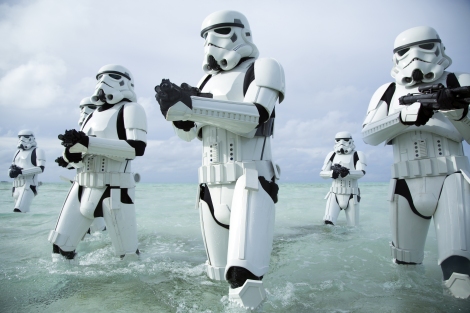 Planet Scarif : The Galactic South Pacific : We now know the name of this world, which is meant to evoke both heaven and hell — tranquility and war. “There’s this sort of South Pacific, tropical paradise planet (Scarif) that subconsciously leads into some of the imagery associated with World War II,” director Gareth Edwards says. “We went to lots of different places around the world, and one of them was the Maldives. When you’re shooting Stormtroopers in paradise, you have the best job in the world, you know? You can’t really deny it at that point.” 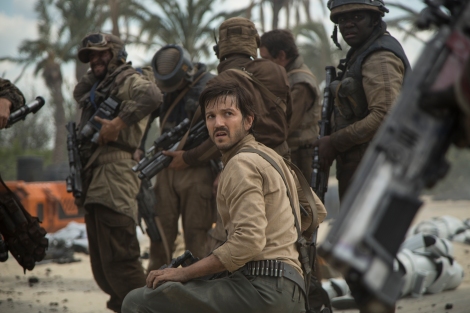 Rebel Soldiers Assemble : Here we see Diego Luna’s Capt. Cassian Andor in the beach battle alongside some fellow Rebel soldiers — all of them human. From the original trilogy, we know a great many creatures also joined the Rebellion. Did those species line up and follow the lead of the humans after the events of Rogue One? Or have we just not seen some of the aliens who will join this battle? Director Gareth Edwards says there are at least two background creatures who fight with the squad, but they aren’t major characters. “They’re not necessarily front-and-center,” he says, before joking: “But maybe one day, there’ll be a spinoff movie.”

Jyn and Cassian : In the era of fandom ‘shipping, it’s only a matter of time before people start drawing hearts around Jyn and Cassian. The filmmakers say he’s the reliable, stable one who counters her loose-cannon tendencies, sort of Murtaugh to her Riggs. (There’s probably a fandom out there who ‘ship the two Lethal Weapon characters, too.) No doubt Jyn and Cassian form a trust and a friendship, but does that always have to mean romance? Is there perhaps value in showing a man and woman whose partnership is strictly platonic, an example of two soldiers who share a deep affection for each other, but not necessarily in that way? Or are we just going to ‘ship, ‘ship, ‘ship until the Banthas come home? 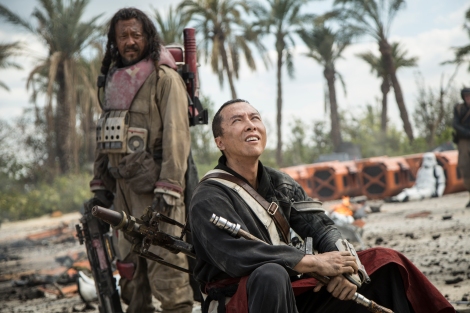 Rest for Baze and Chirrut : Hong Kong action star Donnie Yen (Ip Man) plays Chirrut Imwe, a blind warrior monk who is not a Jedi but follows the path of the Force, and Chinese martial-arts actor and director Jiang Wen (Devils on the Door Step) co-stars as Baze Malbus, Chirrut’s Force-doubting rough-and-tumble protector. Like the original Star Wars, these characters owe a debt to the two peasants from a 1958 Akira Kurosawa adventure saga. “They’re inspired, again, by what inspired George in The Hidden Fortress, “ Kennedy says. “You could even say to some extent it’s, you know, R2 and C-3PO, a little bit of that.” 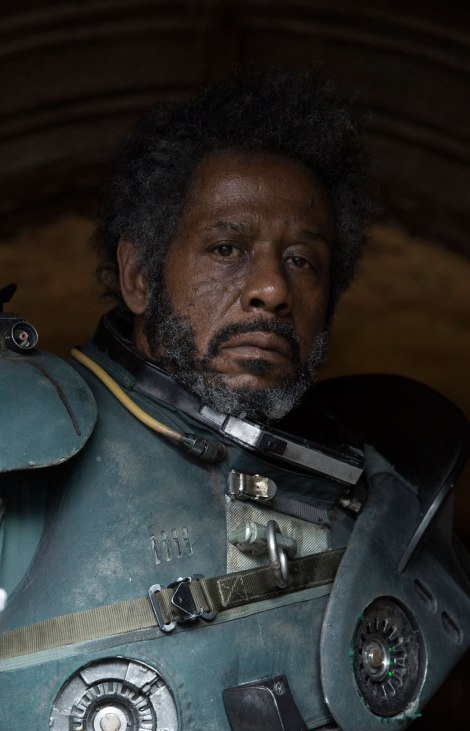 Saw Gerrera, played by Forest Whitaker in Rogue One, originally debuted in “A War on Two Fronts,” the first installment of a four-episode arc of Star Wars: The Clone Wars. Voiced by Andrew Kishino, Saw helped lead a rebellion against the Separatist droid occupation of his home planet Onderon and, along with his insurgent group, received training and fought alongside Anakin Skywalker, Ahsoka Tano, and Obi-Wan Kenobi. He was tough, a natural leader, and essentially laid the groundwork for what would become the Rebellion

Chirrut Imwe’s Weapon : This shot of Donnie Yen’s blind warrior-monk, Chirrut Imwe, gives us a good look at a new kind of weapon on his back. In the trailer, we see him face down a Stormtrooper using only a wooden staff. (No laser sword for him!) But the device slung on his back looks unusually ornamental for a mere blaster. It seems to be a more elegant version of the kind of bowcaster used by Chewbacca, and it makes me wonder if it has any historical significance. Also, what’s a sightless warrior doing with any kind of blaster? Does his faith in the Force somehow help ensure his aim is true?

The Surly Pilot : We don’t yet know what kind of craft he’ll be maneuvering, but Riz Ahmed (Nightcrawler) will costar as the Rebel squad’s lead pilot, Bodhi Rook. “He’s a very experienced pilot. Flies a lot of cargo, one of his key jobs,” Kennedy says. “And he tends to be a little tense, a little volatile, but everybody in the group really relies on his technical skills.” But what do you make of the Imperial insignia on his shoulder?

Krennic Schemes for Dominance : Ben Mendelsohn’s Director Orson Krennic is responsible for protecting the security of the Death Star project, but he’s also a manipulator within the Empire. “He understands the system and he knows how things work, but he also is not above trying to bend it to get what he needs or what he thinks he wants,” says Kiri Hart, Lucasfilm’s head of story development. Krennic is intended to be a contrast to Imperial officers we’ve seen before, like Peter Cushing’s Grand Moff Tarkin. “Tarkin is the model for these really cool, icy types, you know?” Hart says. “Krennic runs a little hotter than that, so that’s kind of fun and it’s a little bit different. … He is unpredictable and volatile.” 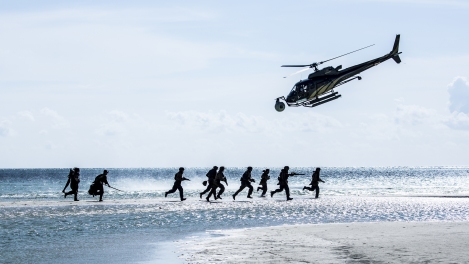 Storming the Beach : Don’t worry, the Empire isn’t using choppers alongside its TIE Strikers to strafe the Rebellion. This is a behind-the-scenes shot, showing Baze, Chirrut, and a squad of Rebel fighters storming the beach. The helicopter camera is a surprising element, however, because it’s not typically the kind of shot we’ve seen before in a Star Wars film, which tend to be more classically composed. Edwards says he’s going for a hand-held, you-are-there approach to filming this battle, and a hovering, swooping camera angle could be an interesting component of that. The question now is how this approach will alter the vibe of what a Star Wars film can be. 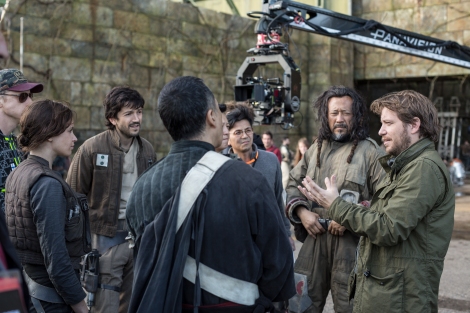 Multicultural Cast : In this behind the scenes shot from the Yavin-4 base, Edwards consults with some of his lead actors: Jones, Diego Luna, Yen, and Jiang and Tudyk (in his performance capture suit). The movie’s Rebel team is a deliberately diverse mix from our own planet, meant to reflect a galaxy filled with a wide variety of humans from many different worlds (not to mention a healthy mix of creatures and aliens). “People are coming to the Rebellion because something has happened that has galvanized or politicized them,” says Hart. “The question just becomes: What are those triggers for different people in different places?”

…Extracts and descriptions from EW 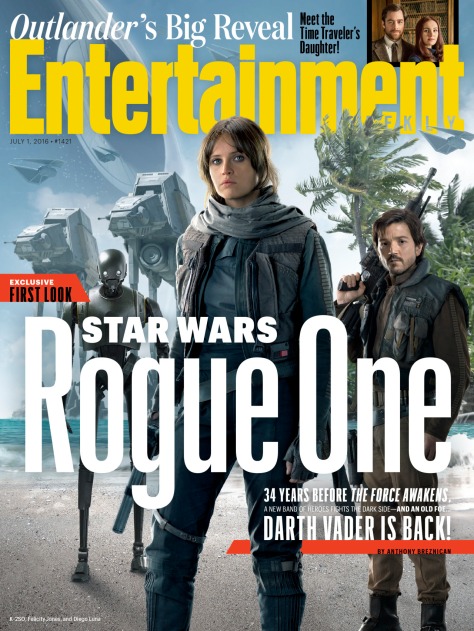 There is a zip file of all the HD High Resolution Rogue One Images (162 MB!) That can be downloaded  here for a limited time on the servers, so we recommend you grab them as soon as possible.