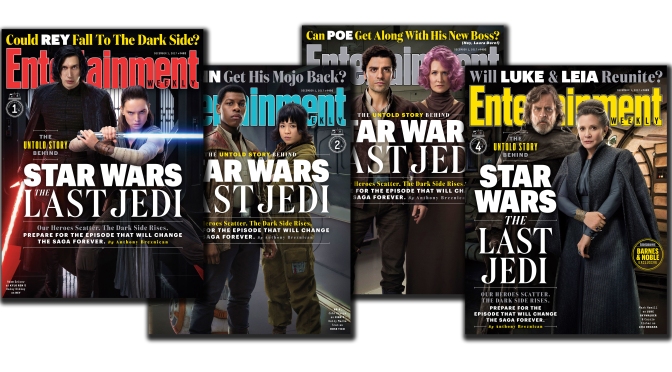 While that may seem unlikely, the second act of every story is where the heroes (and villains) are tested and tempted. As writer-director Rian Johnson picks up the narrative after 2015’s The Force Awakens, his job is not to protect these characters, but to put them in harm’s way.

“There’s a history in Star Wars of the attraction between the light and the dark, whether it’s the story of Anakin basically turning from this sweet kid and seeing his seduction to the dark side, or even with Luke,” Johnson says.

“Even though you never really believe he’s going to go over to the dark side, the whole revelation of ‘I am your father’ has to do with Vader and this darkness that [Luke] thought he could just dismiss as ‘That’s the bad guy. I don’t have any of him in me,’” Johnson adds. “Suddenly he realizes ‘No, I come from him. I have quite a bit of him inside me.’”

That twist (37-year-old SPOILER ALERT!) in 1980’s The Empire Strikes Back established the second film in George Lucas’ space fantasy the most beloved in an already worshiped series. It knocked the story off balance. It made fans think: I’ve got a bad feeling about this.

The Last Jedi stands in a very long shadow. But it aims to cast a few shadows of its own.

The wounded Finn is ready to be done with war, but meeting a starstruck fan like Rose inspires him to stick with the good guys just a little bit longer. While Rey and Kylo Ren try to knock each other off course, these two are here to keep each other on track.

Not every pairing is so collegial …

Who can’t relate to the perils of new management?

The Resistance paid a high price for its victory in The Force Awakens, and with the New Republic’s capital demolished, Leia’s forces are battered, bruised, and scattered.

A new leader rises to guide the battle against the First Order, Laura Dern’s Vice Admiral Amilyn Holdo, who doesn’t quite have Leia’s everyman (or everywoman) touch with the troops.

That leads her to conflict with X-wing ace Poe Dameron (Oscar Isaac). His history, training, and loyalty lies with Leia – but what he doesn’t realize is, so does Holdo’s. Both learned everything they know from the princess turned general.

Among the questions we explore in this issue: whether Luke Skywalker and Leia Organa will ever see each other again.

After the death of Han Solo, the original team of heroes can never be fully reunited. But there is still a chance these two could find each other again, which is especially poignant given that this will be the late Carrie Fisher’s final appearance in a Star Warsfilm.

Not all of the storylines in The Last Jedi aim to break the heart. Some will fortify it.