Behind the Scenes, images have landed online from Star Wars: The Mandalorian…check them out below and info from SlashFilm.

The Mandalorian is a product of an amazing combination of practical and digital technology, specifically, the “Stagecraft” technology that uses a rear-projected LED screen to create a reactive environment for the actors to work against. A series of behind-the-scenes photos released last week showed us how Stagecraft worked, but a new group of images give us an even deeper look at the process — as well as a particularly silly-looking IG-11 —on the set of The Mandalorian. See the new The Mandalorian behind the scenes photos below.

We were already in awe of how the “Stagecraft” technology essentially revolutionized the green screen, creating an immersive backdrop for actors after seeing the first behind-the-scenes photos last week, but this time, we get to see some of the smaller inner workings of The Mandalorian set. Specifically, the inner workings of IG-11, the fan-favourite assassin droid voiced by Taika Waititi which can be seen in its digitally unaltered glory in the first photo. A stoic and ruthless droid that is reprogrammed to become part of Team Mando, IG-11 provided his fair share of comedic moments. But looking at him behind the scenes, with a stand-in dressed in a grey mo-cap suit with a model of IG-11’s head perched on top of his head, makes the droid’s presence is even funnier.

The second photo shows a different angle of last week’s image we saw of Kuiil riding a blurrg with Baby Yoda in hand, trying to make it back to The Mandalorian’s ship the Razor Crest with Imperial Scout Troopers are in pursuit. The third shows executive producer Jon Favreau hard at work with his crew, bringing the acclaimed Disney+ series to life.

The Mandalorian Chapter 4 – Sanctuary has now landed with more of that classic Ralph McQuarrie style the end credits. 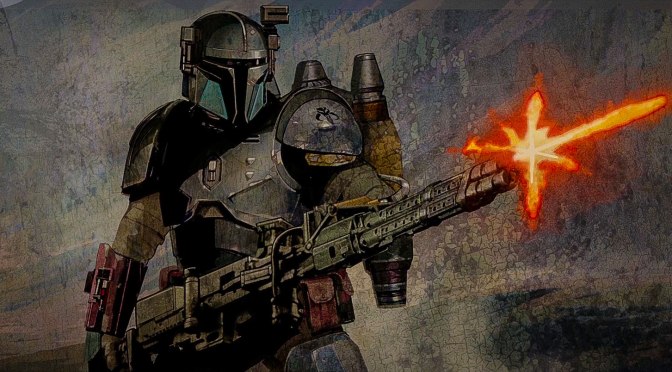 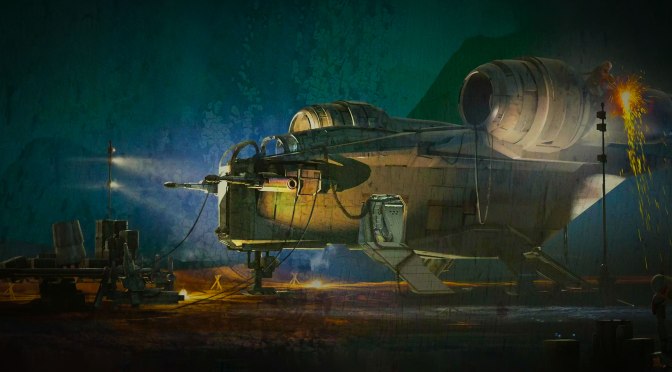 The Mandalorian Chapter 2 – The Child has landed with more classic Ralph McQuarrie style the end credits.

The Mandalorian has finally landed on Disney+ in the North America and Episode one delivers a thoroughly satisfying Star Wars experience, Jon Favreau really leans into the sci-fi Western genre and kicks it off with a real bang.

Dave Filoni’s live-action directional debut for the opening episode is filled with so much love, passion and is pure vintage Star Wars, it’s no wonder they call him the “Chosen One”—to execute Lucas’ original vision.

…A welcome return to the ‘old school’ Star Wars style.

And to further add to the classic style the end credits are very reminiscent of Ralph McQuarrie.

Also over on Twitter Star Wars and The Mandalorian ‘Official’ accounts have been sharing some awesome posters by various artist.