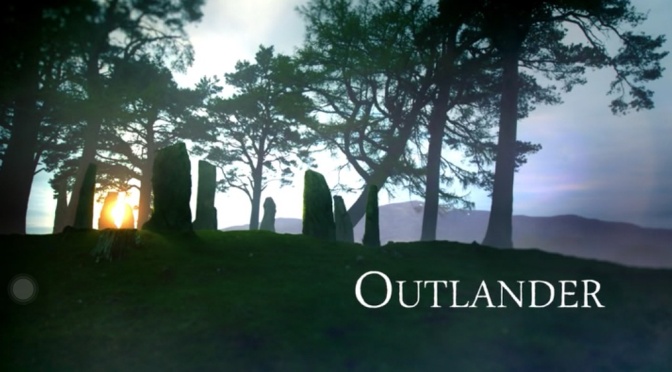 My cinephile daughter recently recommend I watch this TV series called Outlander…which she hardly ever does, so I thought ‘it’s gotta be good’ and I wasn’t disappointed. We finally got to watch it not knowing too much about the plot, only that it’s (like most TV shows to date) sourced from a best-selling book series, this one penned by Diana Gabaldon. The series follows the journey of a fiercely independent and sensible English woman called Claire Randall played by Irish model Caitriona Balfe (Now You See Me ). Claire is a war nurse with initiative from 1945 who by her societies standards is way ahead of her time, her unusual upbringing provides a strong feminist lead, ostracised and tested even more so as she is mysteriously swept back in time to the Scottish Highlands of 1743. In this time we follow Claire in her gripping tale of love, lust and passionate adventures…need we say anymore? just pressed the play button for the opening episode ‘Sassenanch’ and sit back.

In the pilot we are introduced to our lead contemplating the purchase of a vase, a great opening scene that resonates what sort of character we have at the helm of this show. From the moment the voice over queues we are clued in that Claire Randall is not the sort of woman to own homeware. Flashbacks to her WWII days as a nurse show Claire as a strong woman build for so much more than just homemaking, though she desires the peace and stability the vase connotes Claire was built for an epic story…what a brilliant story it’s like the first page of a book you don’t want to put down.

Next we see the sweeping vistas of the glorious Scottish highlands as Clare and her husband Frank Randall (played by Tobias Menzies) escape to Inverness for a second honeymoon to get reacquainted after 5 years apart. The Mrs Baird’s B&B with black crow blood splattered over the door, as they’ve arrived on the 27th of October, St. Odhrán’s feast day of Samhain, which over time merged with All Saints’/All Souls’ to create the modern Halloween Day. Samhain really underpins the mystical side of this opening episode.

They don’t waste any time getting reacquainted and the bed springs are soon squeaking…which brings wry smile to Mrs Baird listening downstairs. One of other reasons for visiting Inverness is for them both to research their passions, Claire’s is Botanical herbs and their healing properties, while Frank’s is to research Jonathan “Black Jack” Randall, part his Genealogy past and soon Claire’s. This research leads to Castle Leoch which we’ll see a lot of in the later episodes. Whilst exploring the ruins they discover the secret torture chamber in the castles hermit room, where Frank say’s one my favourite lines ‘why Mrs Randell! I believe you’ve left your knickers at home’ and he’s soon got his head between her thighs on a dirty table.

Frank’s research into Jonathan Wallverton Randell captain of the dragoons of the British army at Fort William continues with the help of his friend Reverend Wakefield, which we hear countless snippets for future episodes, including the one’s from Claire’s tea-leaf and palm reading from Mrs. Graham, the leader of a modern-day druid society. More mystery prevails as she finds a palm pattern she’s never seen before with the life lines interrupted and marriage lines divided, meaning two husbands…but the lines should have been broken, and her’s was forked. Claire never put any stock and superstition, but thought Mrs Graham’s words had a ring of prophecy…the war had taught her to cherish the present because tomorrow might not come to pass, but what she didn’t know at the time, that tomorrow would prove less important than yesterday.

Then there’s the spooky scene, of what looked like Jamie (Sam Heughan our hero from later in the episode) watching over Claire from outside her window as she swears “Jesus H Roosevelt Christ” trying to get knots from her hair, which Frank witnesses and approaches Jamie who turns and walks away which is followed by a haunting ghostly sound and he vanishes before Frank can turn around…this is followed by thunder, lightning  and a power cut.

Suspicious Frank, who looked like he’d seen a ghost, and thought the chap staring up at Claire, and asked if was someone she’d nursed or took comfort with during the war and was trying to reconnect, a surprised Claire wasn’t happy about the implied unfaithfulness. They soon make up with some super ‘make up sex’… it was their bridge back to one another after the war, the one place where they always met, after whatever obstacles presented themselves, during the day or night, they could seek out and find each other again in bed, and it seemed as long they had that, Claire had faith everything would work out…little did she know.

That night they set the alarm (one thing I love not doing on holiday) but Frank wanted to observe the Samhain witches perform the druid rituals at the fictional standing stone circle of Craigh na Dun (or Craig na Dun), one you’ll see at the during the main titles of each episode accompanied by the The Skye Boat Song, with lyrics adapted from a poem by Robert Louis Stevenson. It’s a song you’ll singing days and weeks to follow, especially the opening lyrics:

..Sing me a song of a lass that is gone, 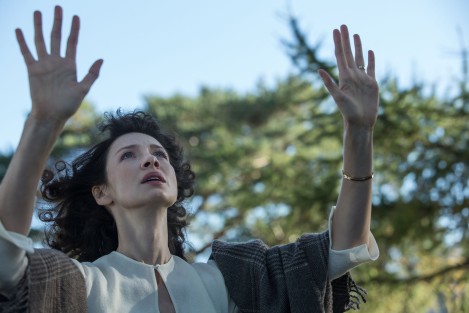 Outlander and the Megalithic Time Portal,

Once at the stones, Frank starts explaining to Claire that the standing stones were carried from Africa , by a race of Celtic Giants, but is interrupted as Mrs Graham and the other Samhain witches, they take cover and witness the ritual, something Claire thought should have been ridiculous parading in circles on top of a hill at night, but the hairs on the back of my neck were prickled at the site and some small voice inside warned her, she wasn’t supposed to be there, and that she was an unwelcome voyeur to something ancient and powerful. 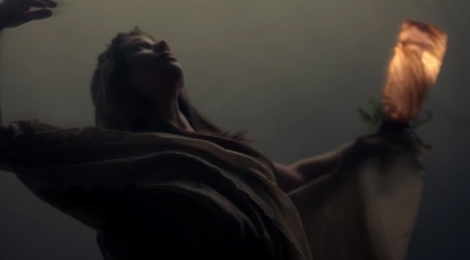 Claire returned the following day to study some Forget me nots at the base of one of the stones. As she left Frank, there was a classic Slow mo final kiss…when would she see him again? At the stones the wind rises, and Claire here’s a howl, as if the stones are talking to her…her hands reach out and touch the Megalithic Time Portal, and she instantly leaves that point in time. When she awakens, Claire discovers that the car is missing, and soon hears noises of what seem to be men engaged in battle or a cinema company filming a costume drama..so she thought, but as real bullets start whizzing past her head she starts racing through woods, running through the woods she stumbles into a man who looks remarkably like Frank, but she soon realizes that the man’s eyes are cold and unfeeling, nothing like her husband’s. The man introduces himself as Jonathan Randall, Esquire, Captain of His Majesty’s Eighth Dragoons…at your service, and soon has a blade at her neck, but feisty Claire responds with “get off me you bastard” and spits in his face, Black Jack responds with “Speech of a lady, language of a whore …I’ll teach the whore”… But before he can do whatever harm he intended, another man knocks him out, and forcibly takes Claire with him. 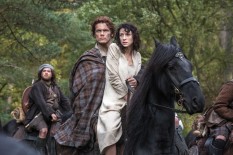 The man takes her to a cottage, where many more men stand talking in a strange language, and one of them, Dougal MacKenzie, addresses her in English. He appears to be the leader, and spends little time interrogating her, but insists they must move soon and so must do something about Jamie before they go. The young man in question is injured, and just as a few men are about to force his dislocated shoulder back into place, Claire puts a stop to it at once and shows them how to properly mend the joint. As the party prepares to leave the cottage, Claire notices that she can’t see the lights of Inverness, “There’s Inverness, you’re looking straight at it” say’s James…there was no electric lights as far as the eye could see, and as much as her rational mind rebelled against the idea,she knew in her heart she was no longer in the 20th century, and her adventure as an Outlander was about to begin. 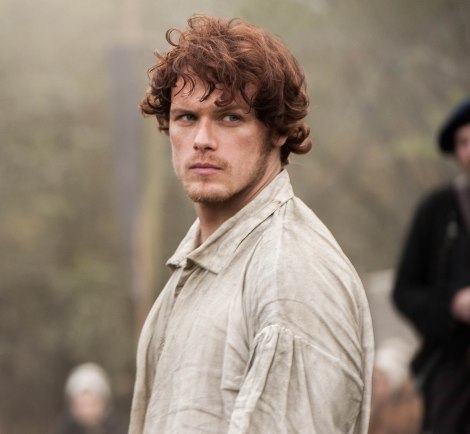 The rest of the episode is a joy to watch, so much so we binge watched the other 7 episodes on Amazon Prime Instant Video, including the horrific 100 lashes upon 100 lashes episode…poor Jamie. We can’t wait for them to launch the remaining episodes of Season 1 which started on Sunday 5th April