If you’re not living in a Star Wars fandom world (like me) you’ll be saying who the blimey is Ann Skinner?  …well in the geeky photography circles she had one of the most enviable jobs in geekologie history, that was as the continuity supervisor for Star Wars Episode IV: A New Hope. She had her own personal ‘The Star War‘ script along with a Polaroid camera and endless amounts of film to record/capture all the scenes in the film for continuity errors. These rare ‘never seen before’ Star Wars photos have such a raw beauty and quality to them, which only instant Polaroid film produces, they even include the lovely little side notes she adds around the borders.

To celebrate the British Film Institute’s amazing new exhibition ‘On-Set – Star Wars Episode IV: A New Hope’ they have been given her exclusive script pages and the Polaroids from the film which include scenes that were never filmed and snapshots of the cast behind the scenes on this immortal sci-fi classic of so love.

Transcript from the BFI

In the spring of 1976, shooting began on Star Wars, a film described by its writer and director George Lucas as a modern fairytale set “a long time ago, in a galaxy far, far away”. Luke Skywalker (Mark Hamill) dreams of becoming a space pilot and escaping his mundane life as a farm boy on the desert planet of Tatooine. His wish becomes reality when he’s plunged into the civil war between the evil Galactic Empire and a band of daring rebels, led by the beautiful Princess Leia (Carrie Fisher).

Star Wars was filmed on location in Tunisia and at Elstree Studios in Hertfordshire. Its innovative special effects were created in California by Lucas’s company, Industrial Light &Magic. Artist Ralph McQuarrie produced early visual concepts which were developed by the film’s American and British crews. Joe Johnston led a team of artists and designers in the US, while British personnel in key visual roles included production designer John Barry, costume designer John Mollo and cinematographer Gil Taylor.

As continuity supervisor on Star Wars, Skinner needed to have a thorough understanding of every part of the script. It was her job to ensure that scenes shot days or weeks apart would seamlessly come together in the editing room. Skinner describes her role as being that of “the editor’s agent on the studio floor; the intermediary between the director and the editor”. She kept a detailed record of the film as shot, so her copy of the script – now held as part of the Special Collections of the BFI National Archive – is crammed full of detailed annotations as well as unique Polaroid photographs taken on set.

Continuity was by Ann Skinner whose impressive CV also includes Far from the Madding Crowd (1967), Darling (1965) and Oh! What a Lovely War (1969). Continuity (also known as script supervision) is a hugely important role but is often overlooked when writing about filmmaking. Continuity supervisors have an extremely demanding job which necessitates a sophisticated understanding of all aspects of film production and film grammar. They also need to have a strong eye for detail and be able to notice and record any changes or discrepancies that would stop a film cutting together. Historically it’s been a role that has frequently been taken on by women (although this is now becoming more gender balanced) and for many years the continuity supervisor was known as a ‘script girl’ or ‘continuity girl’.

Skinner’s first job upon receiving the script in pre-production was to go through it to time the expected running length (to keep producer and director informed of the film’s expected overall duration); to check the running order of scenes to ensure days and times of day were consistent and followed a logical progression (continuity mistakes can often be introduced during rewrites); and to make notes on particular props that would need to be used across particular scenes.

The pages below are from the opening scene of the film, as Princess Leia’s ship is attacked by an Imperial Star Destroyer. The evil Dark Lord Darth Vader believes the rebels have stolen the plans for the Death Star, a new space station designed to become the Empire’s most deadly weapon. You can see the first notes Ann made to her script in pre-production in red and green pen. The note “U.S.A.” means that this scene consists of special effects and is being created at Industrial Light & Magic in California. Other notes highlight more localised effects (the explosion and smoke) and the props that are needed (Luke’s utility belt, electrobinoculars and rifle). 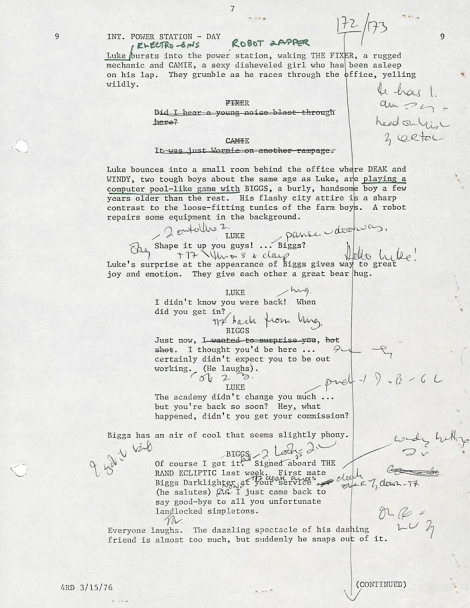 Because films are rarely shot in sequence, the slate number also enables an understanding of when during production a particular shot was taken. The lower the number, the closer to the beginning of the shoot. This page contains both studio and location scenes. Shooting on Star Wars began in Tunisia (representing the desert planet Tatooine) so scenes taken there have lower slate numbers than those done later at Elstree (83/84/85 as opposed to 735-747).

An enormous amount of information has to be captured within a short amount of time, so Polaroid photos provided a quick visual reference for details such as the positions of characters and props, and intricacies of costume. These were stapled into the script alongside the relevant scenes, and are generally accompanied by copious notes adding more information.

Capturing information about different takes and dialogue changes is a central part of the continuity supervisor’s on-set work. The images below show rehearsal and different take positions for the scene in which Luke goes in search of the droid Artoo and is attacked by Sandpeople (aka Tusken Raiders). At the end of each day, Ann would type up continuity sheets, using her script as reference. This would include information for the editor including which takes director George Lucas wanted to use.

Some scenes presented particular challenges in continuity terms. After Luke, Han Solo and Chewbacca (Peter Mayhew) rescue Princess Leia from her Death Star prison cell, they attempt to escape via their only possible escape route, down a garbage chute. They land at the bottom and the walls of the garbage masher begin to close in, threatening to crush our heroes.

Skinner took a large number of Polaroids in both colour and black and white to record the position of the walls and debris at different stages in the scene, often linking these stages to lines of dialogue (such as Han’s sarcastic response to Leia’s orders: “yes your worship”).

Skinner’s script also includes scenes that were shot but which didn’t make it into the finished film. The shooting script has more action on Tatooine as we see Luke meeting up with his friends The Fixer, Camie and Biggs (who we meet again later in the film as one of the rebel fighters who joins the assault on the Death Star).

Skinner’s script was an essential tool of the production of Star Wars, created to aid the immensely complicated task of shooting a film. Viewed now though, it serves as an incredible visual record of the making of a legendary film. Through its notes and images, we get a sense of what was happening on set, and how location, studio and special effects work meshed together in post-production. 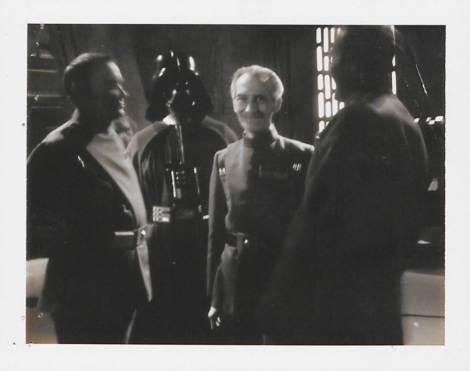 We even get to see actors relaxed and out of character and/or (partly) out of costume. Two of my favourite such images show Darth Vader (David Prowse) sans helmet, and Peter Cushing as Grand Moff Tarkin (described in the script as a “thin evil man”) breaking into a decidedly out-of-character smile.