After a few months of silence in the latter parts of 2015, the mighty Craig Drake returned  to present some new artwork in the final show of 2015 at the Mondo Gallery called “Snikt. Bamf. Thwip: A Celebration of Marvel Comics,” a poster event featuring an awesome lineup of other artists, and with the Marvel Cinematic Universe been one of the dominant pop culture force in blockbuster films, and it looked like the exhibition had no problem getting inspiration from Marvel’s rich history of characters that began over 75 years ago. “Snikt. Bamft. Thwip.” honored that legacy of comics featuring gorgeous, original screen prints of X-Men, Spider-Man, Daredevil and many more. 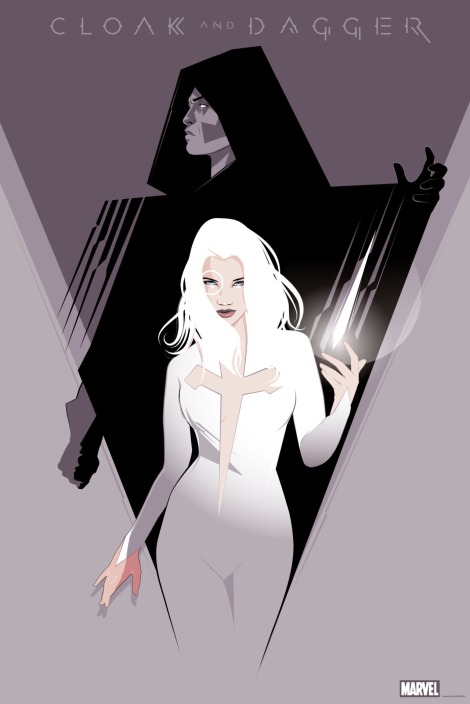 The first piece for the Marvel Exhibition by Mr Drake was Cloak (Tyrone “Ty” Johnson) and  Dagger (Tandy Bowen) which is quite a sexual rendition of her, both were originally created by writer William “Bill” Mantlo and artist Edward Hannigan. These two characters are truly steeped in the richness of the  Marvel Cinematic Universe, having first appeared in Peter Parker, the Spectacular Spider-Man #64 (March 1982).  After a number of additional Spider-Man guest appearances, they were given their own four-issue limited series, and the rest is now Marvel history. They appeared alongside Doctor Strange, and played a small part in the Infinity Gauntlet saga and are revealed to be members of Captain America’s faction of super heroes who oppose the Superhuman Registration Act during the “Civil War” storyline…so you can see they are tightly knitted in the current Marvel Cinematic Universe. Later they became part of the Dark X-Men and also working alongside Wolverine to finally appearing in X-Men: Age of Apocalypse…the perfect cross-over duo. The question is why are Marvel/Disney ignoring Cloak and Dagger in the current films, in fact they are not even on any of the current comic lineups…? 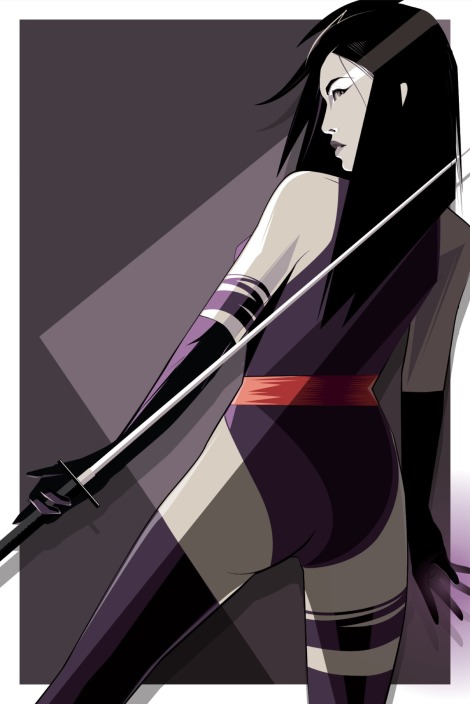 The other X-Men contribution from Craig Drake was another sexual rendition, this time Psylocke (Elizabeth “Betsy” Braddock) who was originally created by writer Chris Claremont and artist Herb Trimpe in 1976, where she first appeared in the Marvel UK comic series Captain Britain. Betsy was initially a supporting character in the adventures of her twin brother, Captain Britain, even briefly substituting for him in the role, before becoming the mutant superheroine and X-Men member Psylocke in 1986. Originally presented as a precognitive in the pages of Captain Britain and then as a telepath, the character eventually had her mind placed in the body of a Japanese female ninja known as Kwannon, gaining many of Kwannon’s martial arts skills and elements of her personality. Psylocke’s codename, coined by the X-Men villains Mojo and Spiral, debuted during her introduction to the X-Men stories post-Captain Britain. Later, Psylocke acquired the power of telekinesis. She briefly appeared in the 2006 film X-Men: The Last Stand, where she was played by Meiling Melançon. Olivia Munn will portray her in the 2016 film X-Men: Apocalypse.

My favourite mondo artist of film culture, Craig Drake…which you’ll already know I’m a massive fan of his Patrick Nagel ‘Pop Culture’ style of visualisation, has at last entered the realm of Star Wars Episode VII The Force Awakens with this rendition of the character Rey and her speeder. Rey is played by 23-year-old Daisy Ridley, who is a scavenger and desert rat on the Planet Jakku…although Craig has initially called the artwork Tatooine Sunset, since Jakku was only recently announced as her home planet at Star Wars Celebration.

His recent artwork was also the main official ‘visual theme’ for the Star Wars Celebration in Anaheim in California, which he also attended signing prints of ‘The Bounty Hunter‘ and ‘The Stormtrooper‘ shown below…both of which are still available at Dark Ink Art.

The Stormtrooper by Craig Drake 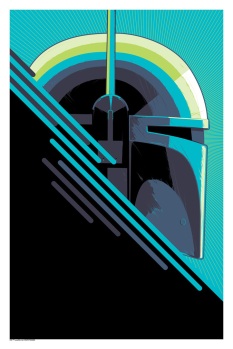 The Bounty Hunter by Craig Drake 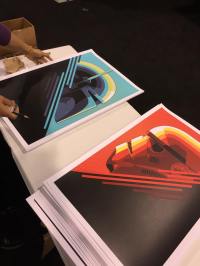 Even the legendary Boba Fett actor Jeremy Bulloch turned up to meet Craig Drake to grab his own personal copy of Proto Fett, which was featured on Milner’s Blog earlier.

Jeremy Bulloch with his Boba Fett artwork by Craig Drake

Part of his Star Wars Celebration ‘Official’ Artwork was also the creation of the ID Badges for the event, some of which I’ve already feature in my Art of Star Wars blog, but this montage shows the full set of characters he created.

He’s also recently dabbled into the Marvel Cinematic Universe with the rendition of Black Widow for the Avengers: Age of Ultron exhibition at the Hero Complex Gallery.

What’s next for Craig!…More Force Awakens mondo art I hope, especially his Solo Show II at Hero Complex Gallery, on 2020 South Robertson Boulevard in Los Angeles, California on the 22 May 2015…watch this space for a Milner’s Blog report on the event.