(SPOILERS)
(Pro·me·the·us) A figure, who represented human striving,
Particularly the quest for scientific knowledge,
And the risk of overreaching or unintended consequences.

A lot of weight rests on the shoulders of Sir Ridley Scott after 30 years hiding behind historical pursuits he’s back to show us kids how it’s done. Known for rewriting the science fiction rule book alongside Lucas and Kubrick, Scott has expectations to meet with his latest film Prometheus.

Before the viral campaign and even before the teaser trailer of the teaser trailer came out we were presented with the tag line: “They went looking for our beginning. What they found could be our end.” translation: An Alien prequel on creation. It seemed an interesting but barely touched subject in film, and with Ridley at the helm an exciting concept. It’s been a long while since a sci-fi film has a budget to match its ideas. Over the years surviving off early 90’s copycats and obvious Scott inspired pieces such as Moon, Pandorum (2009) and Sunshine (2007) we were in desperate need of our knighted director and here is back in his most successful arena… 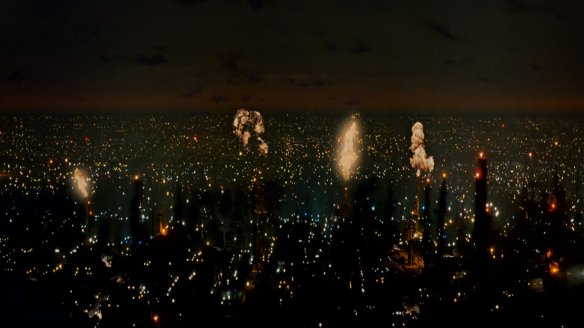 Prometheus opens up with naturalist cinematography; panoramic shots of evolving terrain feed our appetite for spectacle making us reminisce on the Blade runner cityscapes. The grandeur score composed by Gladiator’s Marc Streitenfeld is woven flawlessly into the landscapes and works well to draw the audience in for that all important first scene. It doesn’t take long to foresee that this is no Alien, without having to wait for John Hurt to cough up his super noodles just minutes in we get our extraterrestrial, killing all hope for tension. Designed as a Titan Michael Angelo the humanoid (or engineer) is one of the films early surprises appearing briefly alongside the familiar fade-in credits. It is plain to see the film lacks the suspense of its classic origins opting out of the horror sub-genre and edging more towards thriller. Within the film we are presented with themes of humanity religion and the classic stables gender, pregnancy, nature and comradeship, parallels that can be drawn out clearly from its predecessors.

The design of the film is hard to flaw with the super visual effects company Weta digital seducing us frame by frame we can see this is going to be a treat for the eyes. Scott has more freedom technically and financially to mould his vision this time round and ultimately more power. Known for being a world-builder Riley’s Roman empires and dystopian cities have left permanent imprints in our minds. He now seeks to unveil a world that Alien could never have dreamt of, the spine-tingling claustrophobic atmospheres created three decades ago have been replaced by vivid open almost staged areas. The beloved space jockey set has been enlarged no longer needing Ridley’s kids as stand-ins as the mysterious control room is now double in size. The leading lady herself Prometheus reflects a perfect representation of the elusive Weyland company too uptight to show her bare wires a professional through and through. The eerie narrow corridors of the derelict ship have been Widened and de-fogged, improved with a few new H.R. Giger’s murals put in place for the diehard fans.

The spaciously designed sets though beautifully sculpted unfortunately kill the tone of the film; having so much to play with this time round it seems riley’s design ideas are basically Alien with hairspray losing a lot of its inherited charm. A promising department is in the costume design, Oscar-winning designer Janty Yates will defiantly be up for some more nominations next year with her sharp intricate designs shaping characters such as the elusive Meredith Vickers. Merit should also be granted to the creature design team the not yet evolved viper-like beings (though slightly ruined by Spall belittling the alien like it’s some common Jack Russell) have us drooling in anticipation for the DVD extras.

Tragically the main let down of the film is its dire screenplay written by Damon Lindelof a TV writer (Lost) who seems to have all of the major studios eating out of his predictable palm whipped us up a script both marketable and patronising. The no bullshit crew of the Nostromo have been downgraded to a laid back accordion playing captain and his betting lackeys; playing trivial one-liner types. The dialog seems to have lost all seriousness in pursuit of gaining a mass audience. Rafe Spall (the comedic spawn of actor Timothy Spall) alongside Sean Harris are pushed aside early on in the film cowardly separating from the group like cartoon duo Shaggy and Scooby making the expedition appear like some immature field trip. 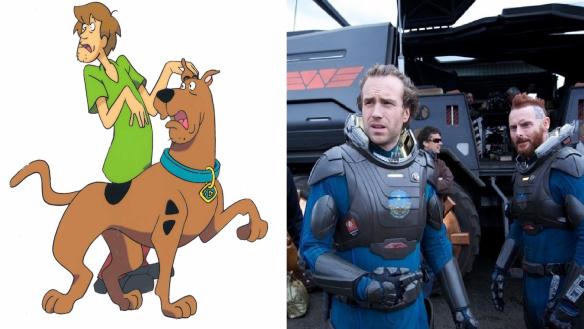 The robotic ice queen Meredith Vickers played flawlessly by Oscar-winning actress Charlize Theron (monster) is another let down, her hidden agendas giving us hope for a weyland-yutani company backstory instead progress to a mini family soap opera. But on a lighter note providing the film’s most shocking moment is our would be protagonist Elizabeth Shaw, The Ripley reincarnate played by iconic Swedish actress Noopi Rapace (The Girl with the Dragon Tattoo) is a god fearing scientist with a love for do-it-yourself surgery giving an on-screen c-section that us girls won’t be forgetting for a long time! The ballsy female though lacking Ripley’s butchness is one to watch. Another act that really stands out is Irish-German born actor Michael Fassbender his catalytic performance as the ‘I’m-a-real-boy’ David certainly attempts to hold the film together, the android Pinocchio models himself off Peter O’Toole’s performance in Laurence of Arabia; the character famously known for his struggles with personal identity and his divided allegiance makes a perfect preface for David’s character and themes to come.

Prometheus is certainly not a bad film the ideas and intent are clearly there; to critically shun the film on all sides would be ignorant. Were the film downgrades in story it beautifully upgrades in design deserving to be appreciated on the best platform possible: IMAX. The incomplete feelings were left with at the end of the film is muted by the arguably studio prompted sequel bait. The unanswered questions are packed away with post surgery Shaw as she is whisked away in the derelict ships twin. If the studio hits it target then Pandora’s box will hopefully be opened in years to come, so buy your cinema tickets and wait in anticipation.

VERDICT: We have jumped from a tension built Hitchcock to a shock horror Wes Craven. A design monument of the moment, certainly no classic.

FAMOUS LAST WORDS: “With science-fiction you have the opportunity of being able to do anything you want, with the digital assistance, and it’s up to you to not do anything foolish or silly or daft, or non-credible” Ridely Scott.

David8 : The Next Generation Weyland Robot