A recent shot of the Space Shuttle Enterprise been transported to its final resting place in New York has to be one of my ‘all-time’ favourite iconic images, as it truly is a ‘once-in-a-lifetime’ photograph by NASA’s photographer Bill Ingalls.

Two of New York’s famous icons stand so tall and proud in this shot with the Statue of Liberty, a true American symbol of freedom, while on the right rises the classic Empire State Building, and then… high in the sky in the background flies NASA’s Space Shuttle Enterprise sat atop a 747 Shuttle Carrier Aircraft from Dulles International Airport, near Washington, D.C. en-route to New York’s John F. Kennedy International Airport, and then onto its final home at the Intrepid Sea, Air & Space Museum on the West Side of Manhattan.

Recently I got in a few conversations with some Twitter followers from New Yorker about this classic shot, most of them were saying it’s not possible to get ‘that’ shot, as the Skyscrapers from the Financial District, Tribeca and Soho would obscure the view between Liberty and the Empire and that it was ‘Photoshopped’ image. Not been a New Yorker, I couldn’t dispel these claims, but deep down I had to believe it was real ‘in-camera’ shot. So with the help of Google Earth Pro I managed to plot a path and find the exact spot NASA’s Bill Ingalls was positioned. 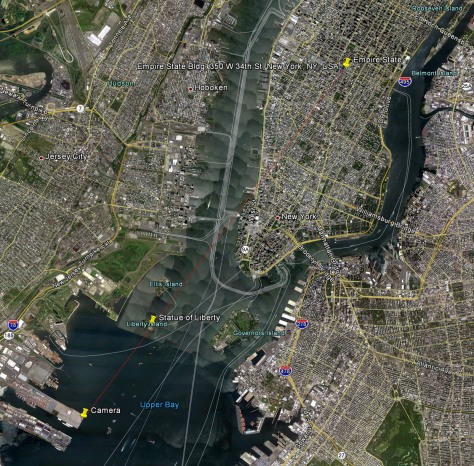 Bill was actual positioned 7 miles away from the Empire State Building on The Peninsula at Bayonne Harbour in New Jersey, just off the Port Jersey Boulevard 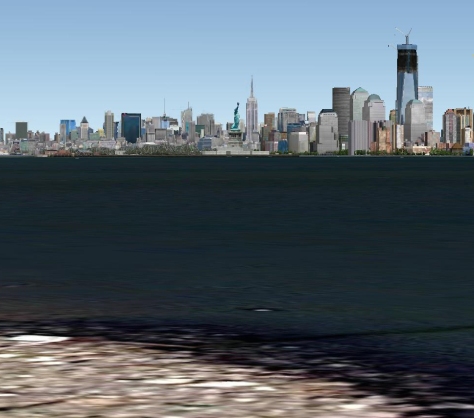 When you now realise how far away Bill was, it makes the enormity and beauty of his capture even more incredible, and rightly deserved to be classed as one of the All Time NASA iconic Space Shuttle images.