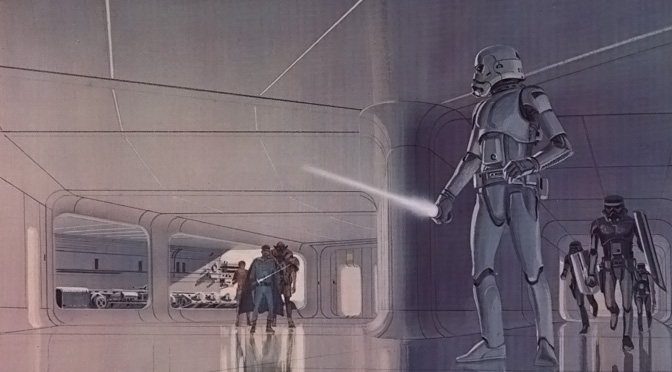 It seems even after his death; Ralph McQuarrie’s visionary concept art from the original Star Wars saga is influencing a whole new generation of Star Wars film makers, especially the latest movie J.J.Abrams is working on (Star Wars VII The Force Awakens) with unused X-Wing designs and architectural visions from the LucasFilm Archives.

The early X-Wing design had a split single on each wing, until it was changed to the two-cylinder engine option on each side, but recent leaked onset imagery and J.J.Abrams special video message from the set of Star Wars: Episode VII, he announced the creation of Star Wars: Force for Change, a brand new Star Wars initiative from Disney and Lucasfilm, in collaboration with Bad Robot, dedicated to finding creative solutions to some of the world’s biggest problems. The first Star Wars: Force for Change campaign got fans to pledge funds to campaign and awareness for UNICEF’s Innovation Labs and its innovative projects benefitting children in need. By doing this one lucky Star Wars fan from Colorado  who contributed got to visit the set. What the video does confirm is the reusing of Ralph’s single wing engine design.

The other exciting resurrection of his work is the Silver Lightsabre wielding StormTrooper, which again has been seen in ‘more’ leaked on-set images, I wonder if the much talked about DarkTropper will make an appearance.

It also seems his early architectural concept art has made it into the film, as you can see from his concept and on-set photos show.

I wonder what other unused Ralph McQuarrie concept art will be used, the forest Jedi temple? the emperors cave temple? I guess we’ll have to wait a year to find out, but until then we can gracious in the fact the old masters work lives on.