It’s quite hard to believe I did this last week, considering it’s 0° today and snowing.

Recently it seems ‘the company’ have noticed my photography skills, so in these recessionista times decided to give me some assignments, so for the first three days of last week it was taken up with doing photo-shoots, each one as diverse as the other.

I’ve shown a selection of images I took separately from the outlined briefs I had on each of the days.

DAY 1: Liverpool Estuary
The brief for today was from English Heritage, who is quite concerned about the visual impact some proposed new buildings would have on the vista from the Old Liverpool Airport looking out toward the Mersey Estuary. They wanted to see some CGI montages of seven key viewpoints in which we had to ‘accurately’ drop in the 3D model to the photographs. Although this was quite a long and technical shoot requiring two 5M survey poles to be recorded within the images. The camera and poles then also had to be precisely triangulated and recorded with a remote GPS tracker linked back to base total station. I have to say this was enjoyable on a techie level, but totally boring on the other. The only saving grace was the glorious weather that started this week off and ‘luckily’ I had the chance to wander around over lunch and take a few personal snaps.

Another stunning day awaited this shoot of The Orangery; a 200-year-old unique grade II listed building in the heart of Wakefield which is also home to Beam, an arts, architecture and learning company working throughout the Yorkshire region and beyond.

I was required to visually document the building for R&D project our company is involved with using Open Cloud and Unity’s VR & AR software to create a virtual ‘play’ building which people can interact with, open and walk-through. Again a slightly technical shoot, but which will have a fun aspect later down the line.

It also has a gorgeous green oasis hidden next to the Wakefield Westgate Railway Station, so I had a little time to explore the gardens and some of the decorative features within the building with the lens.

DAY 3: Leeds
This day was the hottest day so far, (75F) and after getting sun burnt on Monday (to which my daughter called me a tomato) I had a Slip-Slop-Slap moment with the old blue factor 50 sun cream.

The ‘free’ brief today was to photograph The City of Leeds in all its glory for a future secret website project. This also allowed snapping some parts of the City I’d always wanted to capture for myself, so after 820 pictures later and 7 hours of walking a circuit of Leeds with lots of zigzagging moments along the way, a few results are as follows… Enjoy…I did

My week is filled with Exhibitions and Private Views; Monday was Sean Mannion’s Lumen Exhibition 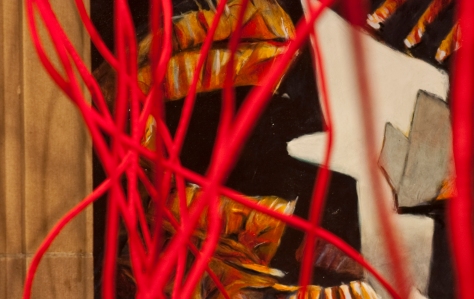 I’ve known Sean Mannion for a long time and was delighted to have been invited to his private View of Lumen which he describes as an exhibition ‘concerned with interior space, habitation and corporeal’

It was held in Wakefield Cathedral which is such a fitting cloistered space for his paintings and the sheer scale of them. Sean’s not the kind of painter to do something 10’’ x 8’’, No, he thinks BIG, were talking between 4ft & 6ft square of pure oil paint filled canvas heaven.

The beauty of Sean’s oil paintings is also the deep meaning and research he does for his work; I asked him how he would describe the Lumen exhibit.

“This fluidity of illumination is recorded in different ways in this exhibition.

My paintings are composed of forms and spaces that reference Megalithic temples found on the Mediterranean islands of Malta and Gozo together with the remains of World War One sea defences found on the north east coast at Kilnsea, East Yorkshire.

These places share similarities, remains from a turbulent past, strong connections with the sea, holding forms that had been eroded to create sculptural ghosts, creating dramatic environments naturally. Ancient and modern architecture is juxtaposed and layered creating new internal spaces and forms.”

He has a great way with words, gifted artist and cleaver wordsmith with hidden talents, just like his work, because trust me when I say ‘they have to be seen’ to appreciate the craft and depth of colour he achieves; you almost fall into them and become mixed with the oils. This is NOT to be missed.

Now comes the BUT!..

Sean show wasn’t a solo event; he had a welcome guest…his wife Charlotte who at first I thought wouldn’t complement his work, how ‘SO’ wrong could I have been.

Charlotte’s concerns “lie within the inequality of others. The red figurative sculptures denote the individual – stripped of all identity – except for the Lumen – the veins carrying the life force.” She says “Without the external indices of race, creed, colour, age, gender we are all the same and should be treated with dignity and humanity”.

I was totally in awe of these 9ft sculptures; I think it was the pure resonance of the space in which they were placed that did it, the FIVE red cardinals, the five fingers of God. The number of figures wasn’t incidental either; she chose it as a number of nature, a Fibonacci number.

The time and work these two have put into this exhibition is phenomenal, on first glance you’d assume Charlotte’s Fingers of God are just red wire, look harder… as they’re red felt which has been hand stitched over copper wire, which alone took her over 50 HOURS of stitching, and she’s no slouch when it comes to needlecraft.

As for Sean, what can I say; the guy really loves his work, almost too much!… Nearly to the point where he can’t put a price tag on them because they’ve become part of him, and when he finally does get to the ugly word ‘money’ he practically gives them away. That man needs an agent.

I would urge you to go see this exhibition, which is now on until Wednesday the 30th of November 2011. 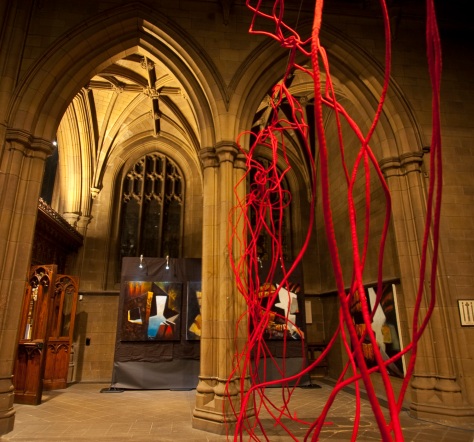